I dislike the fact that SQL Server 2008 Express needs to be a pre-requisite for installing the latest version of Adcenter Desktop. Here are 2 question that I would like to ask Microsoft. 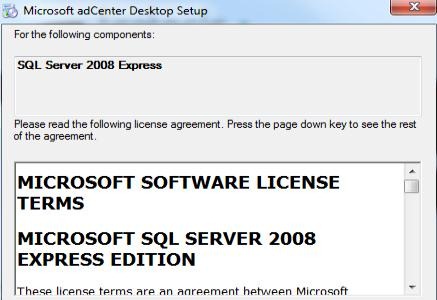 But what can I do? To be honest, not much. If I want to continue advertising on Adcenter and using the Adcenter Desktop to do campaigns management a bit easier, I’ll just have to let SQL Server 2008 Express intrude my computer. There’s certainly no harm in having it on your computer. But the fact remains that SQL Server 2008 Express is not a simple piece of software that cost 5MB of disk space or will ever be used for any other purposes (well, not unless you’re a software/web developer) and having users to install it as a pre-requisite is a bit overkill.

And not to mention that SQL Server always install with a bunch of services (go check it out at START > Run… > services.msc)

Maybe “less is more” is not found in Microsoft Advertising department’s dictionary after all?