You are here: Home / Archives for Coding & Development 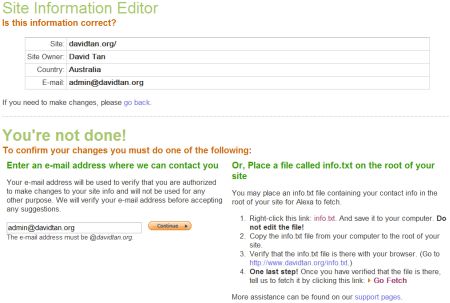 Alexa is a search engine own by amazon. It might not be popular as a search engine, but it’s one of the industry standard of determining how much traffic a site is receiving. Simply put, it’s useful to list with them so they can start tracking your site’s traffic ranking, or maybe even help you get listed on search engine a little bit earlier. END_OF_DOCUMENT_TOKEN_TO_BE_REPLACED

Technorati is a blog tracking service which crawls and lists some of the web’s most famous blogs. It’s a good idea to add your blog into technorati (technorati call this “claiming” your blog). In wordpress, you are already pinging rpc.pingomatic.com which notifies feedburner and technorati etc. By taking this a step further by claiming your blog in technorati, you expose yourself to a wider audience.

In good spirits, Davidtan.org has just been “claimed” 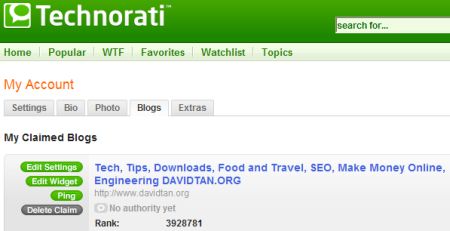 Add davidtan.org to your technorati favorites 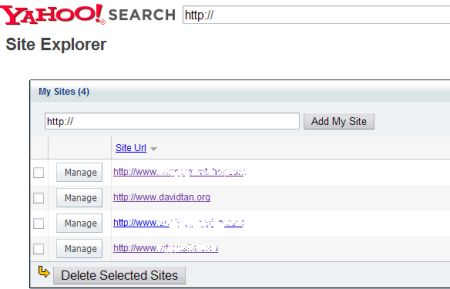 What is Yahoo Site Explorer

1. Access the information we have about a site’s online presence
2. Find which sites and subpages are indexed by Yahoo! Search!.
3. Find pages that link to that site or any page. (inlinks)
4. View the most popular pages from any site.
5. Submit and track feeds for your sites.
6. Find what subdomains of the site known to Yahoo!
7. See other information Yahoo! detects about your site, such as language.
8. Delete URLs that you don’t want indexed by Yahoo! and more
END_OF_DOCUMENT_TOKEN_TO_BE_REPLACED

The Eclipse PDT is the first Eclipse project that targets the PHP developer community that is estimated to include about 4 million developers. Meanwhile, the Eclipse open-source application development platform has about 2.3 million users who use the tools mostly for Java and C/C++ development. Eclipse Foundation officials said the release of the PDT 1.0 will allow the PHP community to begin using an Eclipse-based IDE (integrated development environment), thus expanding the entire Eclipse community. The Eclipse Foundation is rolling out the availability of the 1.0 release of the Eclipse PHP Development Tools project.

Jeffrey Hammond, an analyst with Forrester Research, said the news of the Eclipse PDT is “a real win-win for both communities. PHP is one of a crop of dynamic programming languages that are increasingly used as a key component of Web 2.0 application development.”

Moreover, Hammond said, “integrating PHP into Eclipse gives it increased exposure and access to the millions of Java developers worldwide who have already chosen Eclipse as their primary IDE (integrated development environment). On the Eclipse side, the PDT helps to challenge the common wisdom that while Eclipse is a great Java IDE, but its not as useful when developing non-Java apps.”

Zend Technologies and IBM proposed the PDT project to Eclipse last year. The PDT is licensed under the Eclipse Public License and is implemented in Java as a set of plug-ins to the Eclipse platform.

“We have received great response to PDT from the PHP developer community,” said Yossi Leon, Eclipse PDT project leader and product manager for Zend, in Cupertino, Calif. “To date we have had over 40,000 downloads of PDT and the feedback has been very positive.”

Key features in PDT 1.0 include: Context sensitive editors that provide capabilities such as syntax highlighting, code assist and code folding; integration with the Eclipse project model that allows for inspection using the File and Project Outline Views and a new PHP Explorer View; support for incremental debugging of PHP code; and frameworks and APIs that allow developers and independent software vendors to easily extend PDT to create new and interesting PHP oriented developer tools.

With Eclispe being the most popular open source IDE with support for popular languages such as Java, C, C++, PHP, Delphi etc (there are also plugins for .NET and Ruby), the temptation to switch and use it is very huge indeed.