I was caught totally unaware of the presence of Google Web Server while reading an article from NetCraft. Since when did Google released a web server?

And it’s already the third active servers across all domain according to Netcraft! 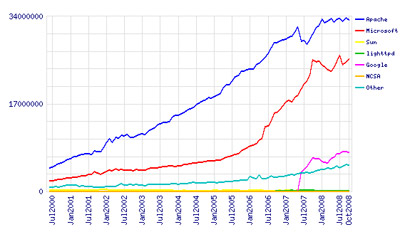 Google was found to be behind a total of 10.5 million sites in October. Microsoft’s name was attached to 62.8 million, and Apache supported 91.9 million sites.

But wait, who are using Google Web Server to run their websites anyway? Again, here’s some answers.

Google now runs 10.5 million sites on its own webserver software, which is used to host its own services in addition to user-generated applications and blogs. Some server names include:

– GFE/1.3, which is used by Google’s Blogger service to publish third party blogs under the blogspot.com domain, and spreadsheets and other documents under docs.google.com.

So as you can see, Google Web Server isn’t available for the public domain, and unless you have started playing with the Google App Engine or some wacky mashups, you probably won’t get your chance to run your personal blog or ecommerce site on it. No wonder I wasn’t aware that it exists…