You are here: Home / Coding & Development / How To Install & Use Zen Coding In Notepad++, Faster HTML + CSS Coding

Zen coding is a pretty cool library that allows web developers to write html and css code faster. It buys you some time so you can work on more creative things instead of figuring out if your html/css tags are properly indented/closed. If this is the first time you read about zen coding, this video will show you what it’s capable of.

Notepad++ is one of my favorite tool and thankfully, zen coding is available as a plugin.

There are 2 versions of this plugin currently for Notepad++:

1. v0.7 which is based on javascript and can be downloaded here
2. v0.7.1 which is based on python and needs to be have the python script (another notepad++ plugin) installed to be usable. You can use the built-in plugin manager to install both plugins.

For some reasons, I can’t get option 2 to work for me so I opted for option 1. Download the zip file and unzip everything into your notepad++ plugins directory.

Restart notepad++ if it’s currently opened. You will find a new menu Zen Coding at the menu bar. 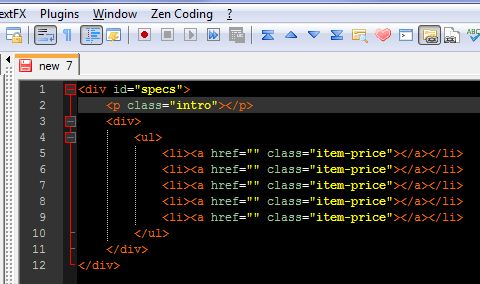 So there you have it, happy coding!